There is significant potential in Mongolia for hydropower generation that is, as of yet, almost entirely untapped. In 1994, the Institute of Water Policy of Mongolia estimated the gross theoretical hydropower production capacity for all rivers with a runoff of more than 1 cubic meter per second (m3 /s) at 6,400 MW, delivering a potential 56.2 million MWh of electricity per year. According to the Ministry of Green Development Water Management Report published in 2013, the actual hydropower potential is between 20% to 60% of this estimate, i.e. between 1,280 MW and 3,840 MW. 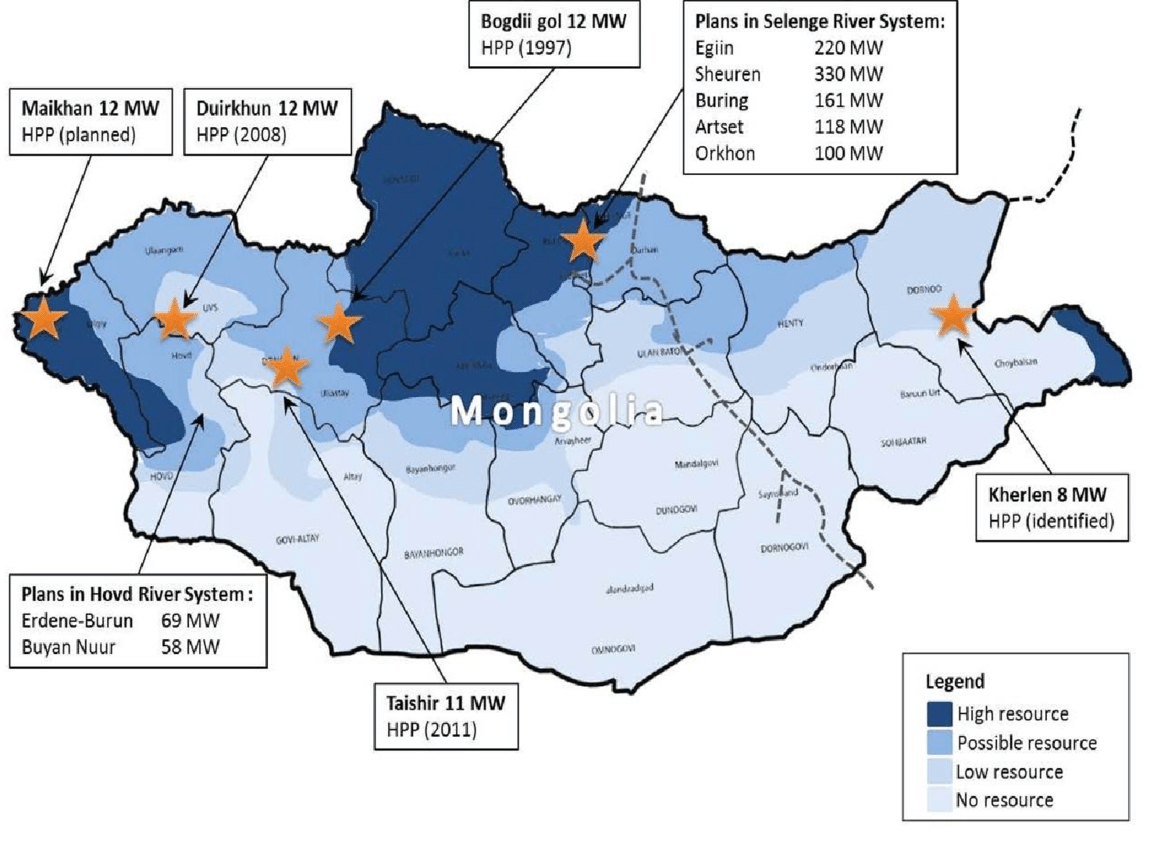 According to NREL, the solar energy potential is 1,500 GW. According to their estimates, Mongolia can, on average, produce 66 MW/km2 from solar energy for the production of 4,774,000 GWh per annum. Despite the success of small-scale solar PV systems supplying nomadic herders, there are currently no large-scale grid-connected solar PV projects in the country. Several utility-scale grid-connected solar PV projects are planned and under development by the private sector. Solar district heating is being pilot-tested in a few locations. Although solar radiation levels are not at levels typical for concentrated solar power (CSP), there is potential to integrate concentrating solar thermal systems with district heating and possibly for industrial applications. 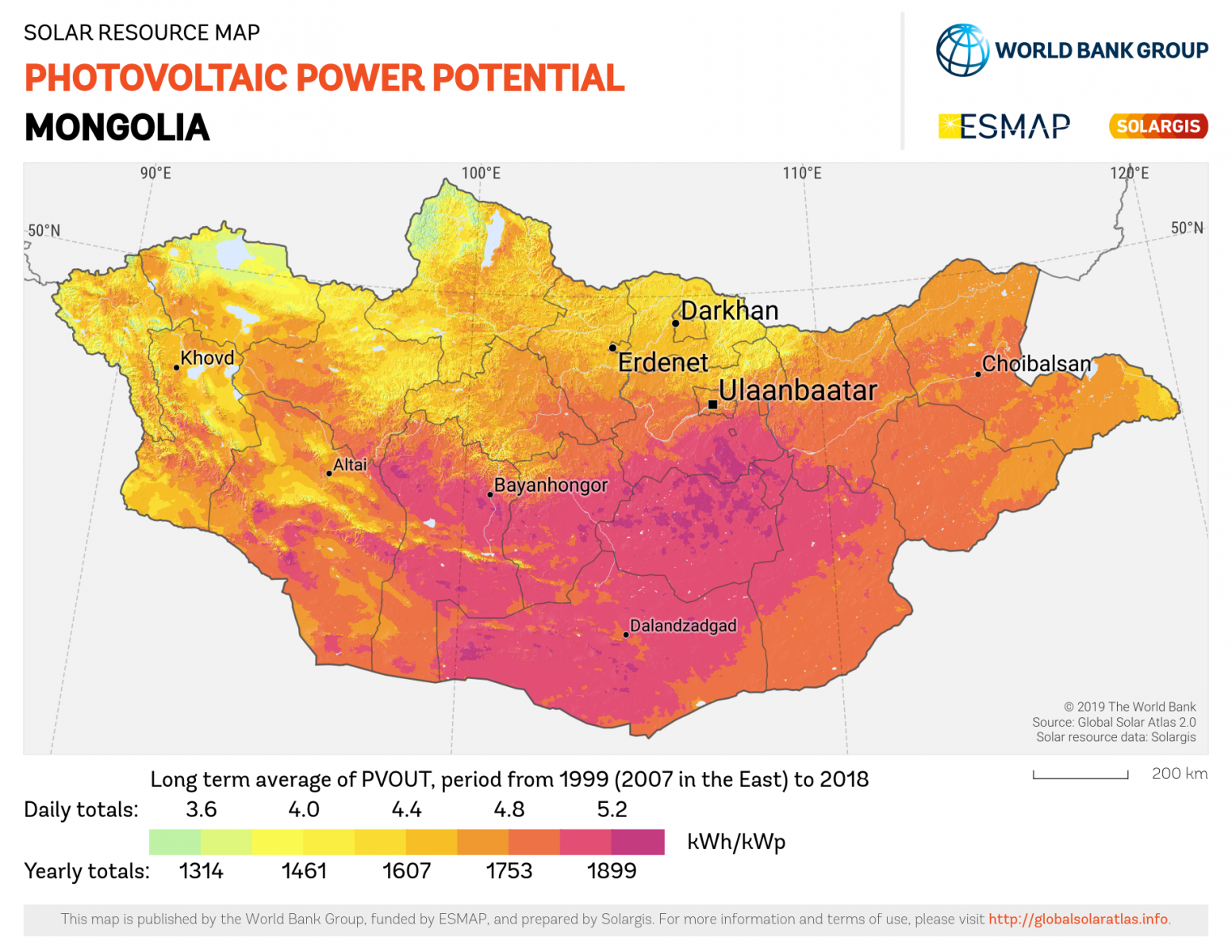 Exposed ridge-top locations in north-central Mongolia have the highest wind resource levels in the country because they are exposed to the strong jet stream. At these sites, wind power density can be greater than 600 watts per square meter (W/m2 ); however, these areas are scattered throughout mountainous regions making it difficult to take advantage of wind resources due to infrastructure limitations.

More than 160,000 square kilometers (km2 ) of land area in Mongolia, or 10% of total land area, has been estimated to have good-to-excellent wind potential for utility-scale applications (power density of 400-600 W/m2 ). According to conservative assumptions made by NREL, at a capacity rate of 7 MW per km2, this area of Mongolia has the potential to support more than 1,100,000 MW of installed capacity, and potentially deliver over 2.5 trillion kWh per annum, or 12% of global electricity consumption in 2009.5 31. To date, the only large-scale wind project developed in Mongolia has been the 50 MW Salkhit wind farm located 70km from Ulaanbaatar.

Wind farms are currently working in Sainshand (52 MW), Tsetsii (50 MW), and Choir (50 MW). In addition to these large projects, there are more than 4,000 small-scale wind turbines used by herders in rural areas. 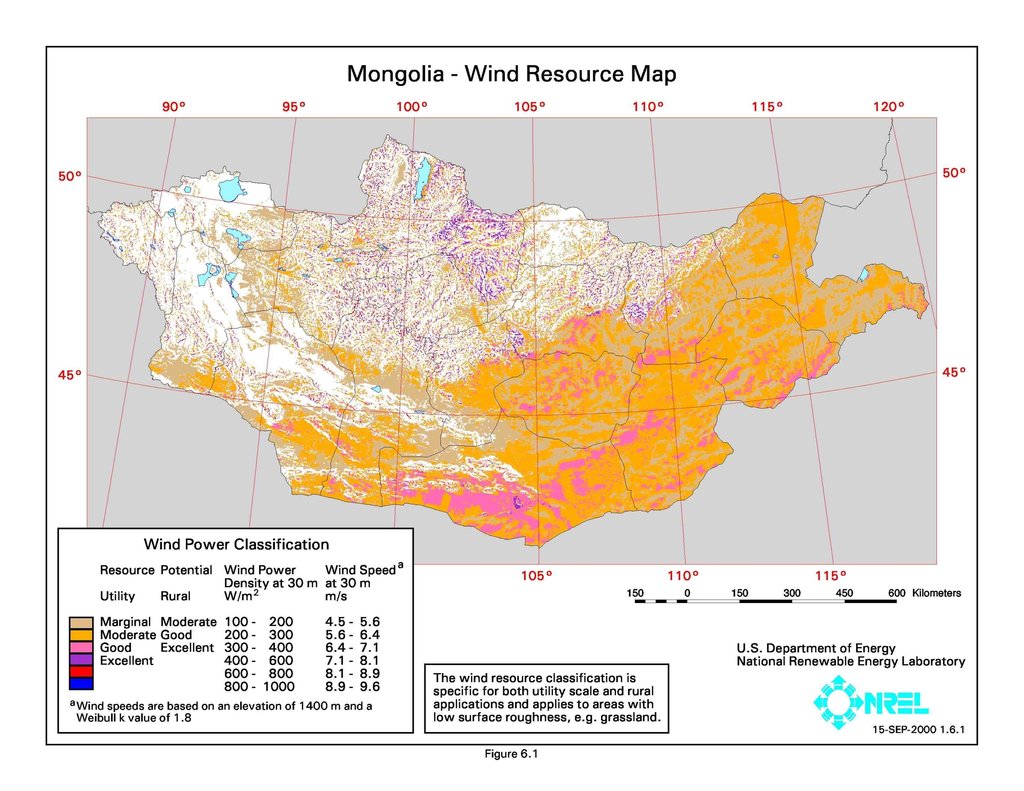